Build your own REST API with Node, Express, Knex and PostgreSQL — part 3

If you're new to the series, click here for part 1 and part 2. So far we've taken care of our database schema, but we haven't done much elsewhere so our api doesn't really do anything yet. Let's change that. Today we're going to start work on adding the routes that will be the endpoints of our API. 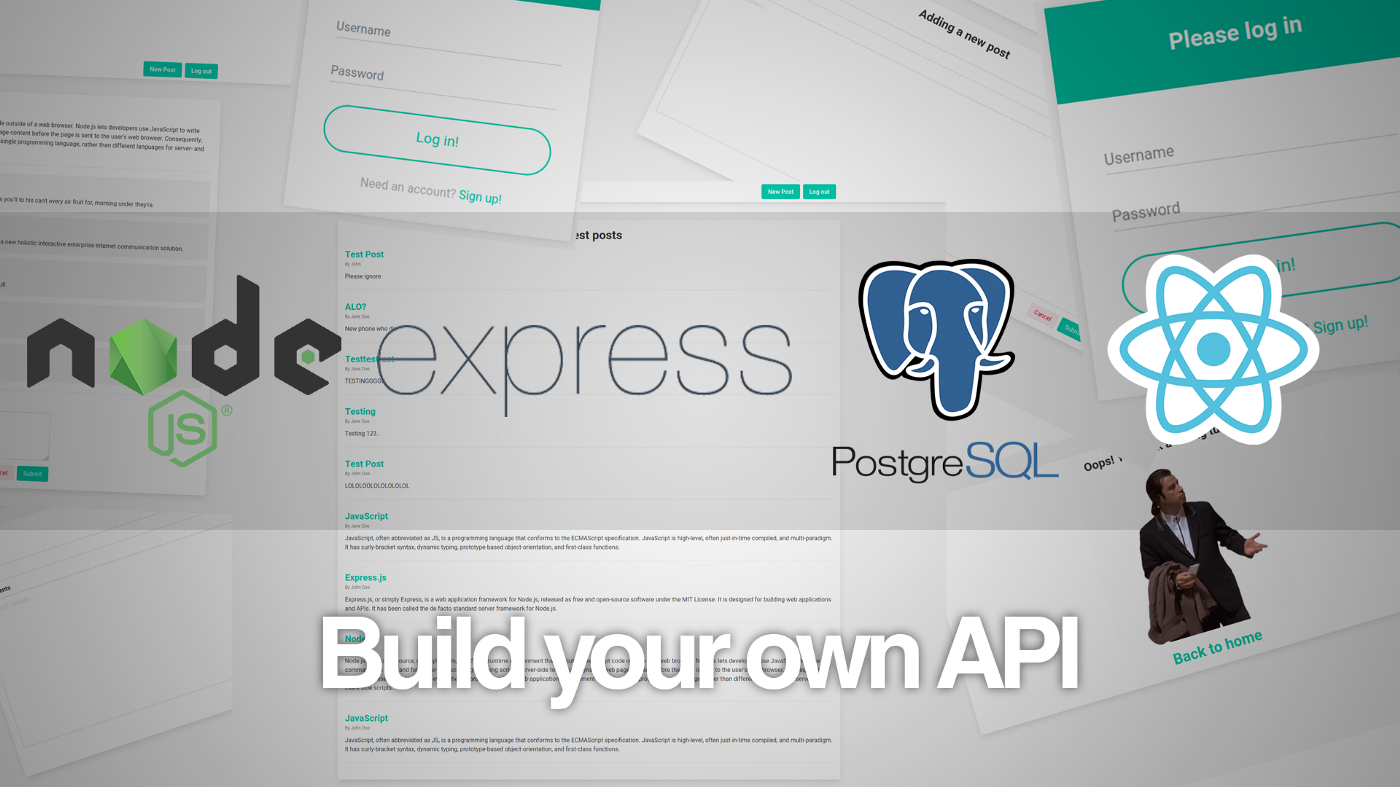 We are about to start making a few additions to our API, so it will be a big hassle to restart it every time we add a change, so we'll use nodemon to take care of that. We're also adding cors to be able to handle resquests incoming from anywhere; as well as chai, mocha and supertest to write our tests. So fire up a terminal and enter:

The db folder will contain additional configuration for our database as well as the queries needed to retrieve data from it. Inside, create a file called knex.js with the following content:

Then, still in the db folder, create another file, called dbqueries.js and put the following into it:

The api folder will contain the routes we'll be using. Inside, create three files called users.js, posts.js and comments.js. Paste the following on each one of them:

Of course, change 'users' for posts and comments in their respective files, minding the quotation marks.

The test folder will contain our, you gessed it, tests. Create three files inside called users.test.js, posts.test.js and comments.test.js and leave them blank for now.

Go back to your app.js file and add const cors = require('cors'); in a new line after const app = express();. Should be near the top of the file. You might also want to change those old school var into const to keep things nice, but it's not really necessary. Now delete these two lines:

and change them for:

Then change your error handler to output json instead of drawing anything on the screen:

What in the world did we just do?

We made quite a few changes, let's go thorugh them:

This is the final piece of the puzzle. Every time we add a new functionality to our api, we need to write tests for it. Let's write one!
In your test folder, create a users.test.js file. In it, then paste this at the top:

We are importing our database files and any dependencies needed for our tests. Now all we need to do is call the describe function with its first task:

This will run every time we run our tests. If you check the package.json file, you can see that it has a line that deletes the test database if it exists and creates a new one every time we run the tests. Then our first action is to run the migrations on the test database to then seed it.
Now our first test will be to check if we actually get what we set it out to deliver, so we'll write a quick test to check our root path on the /users route:

Keep in mind that this goes still inside our describe call, right after our first action and before the last closing braces, so it should look like this:

Now all you need to do is run npm test and if everything went well, you should see something similar to this:

If you have issues at this point, try deleting both the development and testing databases and run the test again.
Finally, to see it in action, go back to the console and type nodemon, then fire up postman and make get requests to http://localhost:3000/users, http://localhost:3000/posts and http://localhost:3000/comments. If everything went well, you should see the data we entered in the seed files formatted as json.
And that's it for today! Stay tuned for new functionality in the next part.